The context for this post: all endurance athletes (runners, swimmers, cyclists, climbers, triathletes, obstacle course racers, marathoners, track athletes, ultra runners, trail runners, road runners, etc.) have a similar, yet slightly different culture. We all have distinct jargon (terms that refer to idiosyncrasies of our sport, even words that are different that mean the same thing). This past Sunday, I ran the Santa Monica Classic 10k, and for the first time in a local road race, pushed my daughter in a jogging stroller. I've run a very small 5k in Brooklyn pushing my daughter, and I've done tons of miles (primarily when she was about 8 months old until she was about 18 months old) with her in training. But this past Sunday was different. As I worked my way into the starting corral (immediately after the 5k race was sent off and the 10k runners loaded in), one girl took notable exception to my being near her with a jogging stroller. This is an Open Letter to her, that I hope stimulates some dialog between our contrasting (and at times conflicting) cultures. This is not to say that one is right and the other is wrong, but to acknowledge that each culture should seek to understand those that share our endurance lifestyle, and understand that when we cross-polinate, and try other disciplines, it may not be what we've grown accustomed to...

***************************************************************************
Dear Anonymous Triathlete Girl,
I'm the dad pushing a stroller in the corral that you threw a tantrum at last weekend. I am that completely random stranger who responded by asking you what your race goal was (to which you responded "42-minutes" which I can remember clear-as-day because it's Jackie Robinson's number, and was about the time I thought I would run that day) and when I then offered to pace you to that goal whilst pushing 55-lbs of toddler and wheeled machine of death you subsequently ignored me, not even offering a halfway polite "no thank you", nor even eye contact from that point forward. Not only did you non-respond, but you demonstratively turned your back to me because I wasn't doing exactly what you wanted me to do. I am still not sure whether your female and male companions were mortified by your behavior, or if they too were giving me the "sharks with friggin' lasers on their heads" stare for being the stroller-guy sandwiched up in the front 250 people in a 3,000 person race. I sensed your race nerves and that the event was important to you, so I chose not to say something awful back to you. I gave you a temporary pass. 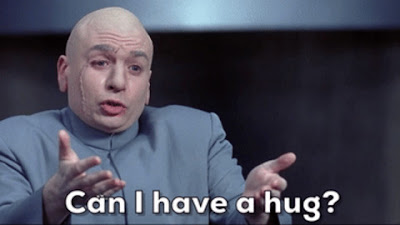 Here's the thing: most stand alone road races allow runners with strollers to compete (my favorite race of this sort is the Redondo Super Bowl 10k, that actually has a separate stroller race/division). I had as much right to be there in that corral as you did. Our crew specifically sought out a family-friendly, strollers-allowed race to run with our young children, and some of us wanted to do that as fast as we possibly could. Athletes are asked to "self-seed" at a race like that (whereas 10k plus person races generally have pace-per-mile signs posted to aid in this self-seeding), and as someone who ended up finishing 65th overall, I had more people in front of me than there needed to be (it took me a full 11-seconds to cross the starting line). I was very conscious about my race-lines, not running over feet or clipping heels. Let me tell ya, it was one of the most difficult 10k's of my life, having to zigzag while pushing my 2.5-year-old daughter was rough. Going up that 2-3% grade to get to the the turn-around on San Vicente built a new room in my pain cave. My daughter tossed her green racing car out of the stroller twice and trying to pick up something while pushing 55-lbs upgrade/uphill while at a race intensity pace, well, damn, you should try it sometime. It's awful. But I'm not asking for your sympathy. I enjoy the hurt locker, quite a bit. 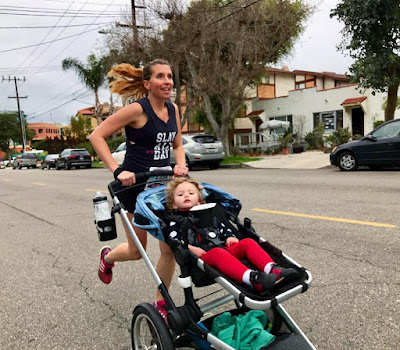 I do get it, nobody likes being passed, nor beat by any parent pushing a stroller. At that very same race, many years ago, I ran 36:13 (my personal best) and had a dad pushing a stroller run 35:30-ish in front of me. Again, a little over a year ago, I was 4th overall at a 5k pushing my daughter in a stroller and was soundly beat by a guy pushing twin 3-year-olds in a double-stroller. No hard feelings either time, just mad props to those badass dads setting a pretty stellar example to kids who won't quite understand why that's so awesome, maybe ever (or until they have children of their own and try to run a fast race while pushing them). At the very least, I take precious little joy in my finishing position. I'm an effort conscious and time-minded athlete. If I run a time I'm capable of and if I worked hard for it, that's satisfying to me. That doesn't mean I won't push myself for position during a race, I mean, what's the point in dropping some coin unless we can push ourselves to be the best we can be with-and-against other competition. I respect my competition. Always. I let my legs, heart, and toughness do the talking for me. I never tell anyone in the corral they shouldn't be near nor in front of me. Nor should you. Nor should anyone.

I'm hoping that somehow this makes it's way to you, and you either find a way to be polite to others planning to suffer alongside you, or maybe select events that don't allow strollers (the LA Marathon, and pretty much ANY triathlon). But, I suggest that you treat someone pushing a stroller with a bit more respect, as the Boston Marathon (a race you've publicly declared you'll run) has a guy who pushes a huge stroller (well, it's more of a strolling-wheelchair) and he also does the Kona Ironman (towing his son in a friggin' BOAT), in fact, he's one of my personal heroes and inspiration to millions. I passed this father-son duo at the Boston Marathon years ago, and I cheered for him and shook his hand. His son cheered for me. It gave me a ton more juice to finish a tough Boston that year.

In closing, I sincerely congratulate you for putting the training in, showing up on race day and running your PR in the 10k. I didn't displace you in your division, nor did my 2.5-year-old daughter (although, when she's about 14, watch out in the female overall division at local events). If we ever bump into each other at another race or local group run, I'll buy ya a beer (or your favorite beverage) to show ya there's really no hard feelings. I wish you luck in your upcoming races in 2017 and beyond. I hope you get into Boston and crush it. Give Rick and Dick Hoyt a high five from me...